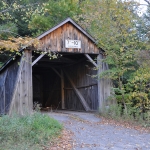 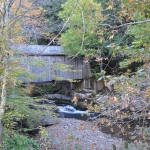 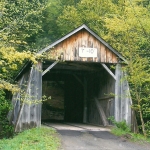 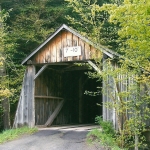 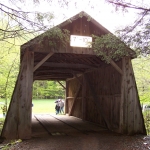 Tappan / Kittle bridge was originally constructed in 1906 by Jerome Moot. The only portion of the original bridge that remains is the framing, thus it does NOT qualify for the National Register of Historic Places. The bridge was named after a road situated nearby called Tappan road.

It is located in the Town of Hardenbergh south of NY-56-02 (Forge Bridge), 8.5 miles of Arkville. It is over the Dry Brook, a single span of 43 feet of King post truss.

The Tappan-Kittle Covered Bridge is one of five covered bridges still standing in Ulster County. It is owned and maintained by the Town of Hardenbergh and carries local traffic across Dry Brook.

Built by Salem Jerome Moot in 1906, this 43-foot-long, single span structure once incorporated a Kingpost truss design. The Tappan-Kittle Covered Bridge is very similar in dimensions and design to other bridges in the Catskill region, all of which feature buttresses. The Tappan-Kittle has three such buttresses on each side.

At one time at least eight covered bridges stood over Dry Brook in Ulster County. Beginning at the county line,they were: Rider Hollow, Lincoln Todd, Gould, Haynes Hollow, Forge, Tappan, Ort Todd and Myers bridges. With the exception of the Forge, Myers and Tappan bridges, the other bridges were washed away in the early to mid 1900s. The historic Myers Bridge was removed in 1989 and has been replaced with a modern style bridge with a roof and sides
covering a concrete deck.

The Tappan-Kittle Covered Bridge was named after a road situated nearby called Tappan Road. On April 8, 1908, the Commissioner of Highways stated in the town highway ledger that the “highway through the lands of George Gould known and described as the old Tappan Road leading from the top of the mountains near Balsam Lake to the Seager Mill to Dry Brook has been abandoned by the public and is no longer used as a public highway and pursuant to section 99 of the Highway Law, the same is discontinued.”

This wooden span has quietly served its purpose for many years, vibrating as travelers passed through its portals braving the most severe floods and watching decades of seasons merge into another. But time eventually took its toll on the little bridge. In 1974, the roof was re-shingled with red asphalt. Poles were wedged from the brook bed below to help hold up the trusses and in the summer of 1976, cables were attached from nearby trees to the underside timbers to give a lifting support.

Local residents have been known to call this bridge Crook’s or Kittle’s Bridge after property owners who have lived on the other side of the brook. Today, it is simply known as the Tappan-Kittle Covered Bridge.

This bridge was totally rebuilt in 1985 and today is supported by I-beams. Only part of the framing comes from the original bridge. The original Kingpost truss design no longer actually supports this bridge as it was originally designed to do, so it is now classified as a Stringer.