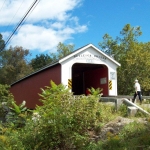 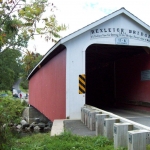 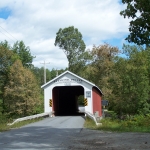 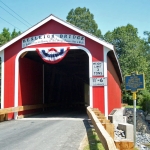 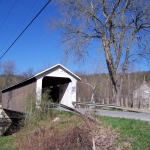 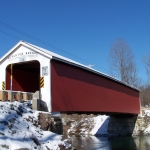 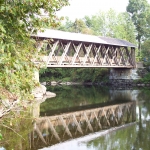 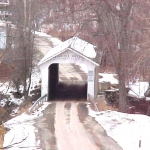 Rexleigh Bridge was originally constructed in 1874 by Reuben Comins (Contractor & Builder) and George Wadsworth (Carpenter). It is listed on the National Register of Historic Places, effective March 8, 1978.

It is located in the Town of Jackson-Salem, east of State Route 22 on Rexleigh Road. It is over the Battenkill, a single span of 107 feet of Howe truss.

Built by Reuben Comins and George Wadsworth in 1874, this 107-foot-long, single span structure incorporates the Howe truss design patented in 1840, and improved in 1850, by William Howe of Springfield, Massachusetts. It is one of only three Howe truss bridges in New York State.

The need for modern crossing at the Rexleigh site became acute when the railroad arrived around 1853. The bridge provided a vital link to the rail service for the farms on the south side of the Batten Kill.

The present bridge was built in the 1870’s by Reuben Comins of Troy, NY improving on William Howe’s design by the use of iron shoes in place of wooden shoes, or thrust blocks. It appears that the bridge was prefabricated in Troy, dismantled, and transported by rail to Rexleigh where it was reassembled, possibly by local carpenter George Wadsworth. Particularly unique are the cast iron “shoes” which were used to fit timbers into joints with iron rods. This feature, patented by R. Comins, a Troy, New York man, has been incorporated into no other known American Covered Bridge but the Rexleigh.

Another unusual feature of this bridge was its slate roof. It isn’t known if it was originally built with a slate roof, but in 1984 it was wisely replaced with lightweight wood shingles.

The flood of 1927 almost swept the Rexleigh Covered Bridge downstream. Old photographs show a water stain part way up the siding. Another major flood in 1938 washed out the dam upstream. The approach roads were changed in 1965 in such a way that the water drained from the road onto the bridge. A severe flood in 1977 undermined the southwest abutment, causing the bridge to settle. This, combined with the structural damage caused by rot, led to the closing of the bridge on September 7, 1977. The bridge literally stood in a decaying state as wood beetles ate away at the main supporting structures. By 1979, the county decided to demolish the bridge and replace it with a newer steel and concrete structure. The word demolish did not sit well with the bridge’s neighbor and unofficial keeper, Mr. Bernice Langlois, and other concerned citizens. Mr. Langlois circulated a petition and collected 1,500 names requesting that the covered bridge be saved. With the help of his daughter, Sally Smith, they organized
a meeting in 1980 to raise public support.

Out of this meeting came the Rexleigh Covered Bridge Association. The group quickly contacted New Hampshire premier covered bridge restorer, Milton Graton of Graton Associates. Upon visiting the bridge, Mr. Graton determined that the bridge could be saved and at a county meeting, made his case. He offered to repair the structure, supporting rods, iron shoes, floor and marble abutments for $59,000 – a price he guaranteed for two years. The Board of Supervisors agreed but stipulated that the Rexleigh Covered Bridge Association raise $20,000 of the total cost. The fund drive was successful beyond expectations, raising not $20,000 but $30,000 made up of donations from near and far.

The project was officially set in motion and the county agreed to raise the balance of the $105,000 estimated total cost. The county would complete the exterior wall and roof work through a combination of highway funds, grants, donated materials, volunteer workers, and county highway workers. Thus, the Rexleigh Covered Bridge was saved.

By December of 1983, Arnold Graton, under the supervision of his father, Milton, completed the reconstruction of the main structure of the bridge and repaired and raised the abutments two feet. In the spring, the fabric of the bridge was completed by volunteers from the Sea Bees led by Chief Hanna, Naval Reserve Mobile Construction Battalion 1. The covered bridge was rededicated on August 12, 1984.

Over the decades, the Rexleigh Covered Bridge has been re-sided, re-roofed and re-painted a number of times. In the 1940s, the Washington County paint scheme was venetian red with white portal trim. During the 2006-2007 rehabilitation, the bridge was once again returned to the venetian red color.

On hot summer days, traffic jams and noise threaten the famed tranquility of the Batten Kill as both the Rexleigh and Eagleville Covered Bridges are popular swimming holes. Kicking out a hole in the siding to jump through is a time-honored misuse of the bridge. Inspection doors and ventilation ports have been employed in the past as a nod to jumpers and to reduce the destruction. In 2006-2007, the Rexleigh Covered Bridge experienced a complete rehabilitation. At that time, it was determined that there was advanced dry rot at the place where the inspection door was, caused by rain blowing in through the open door. Thus, a wire mesh was installed over the inspection door between the trusses and the siding at both bridges.

From Salem, take State Route 22 south for 2 miles, turn left onto Rexleigh Road and proceed 1.5 miles to the bridge.