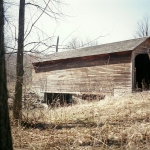 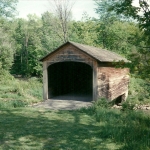 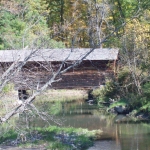 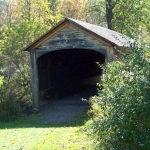 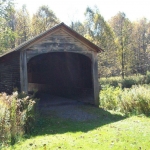 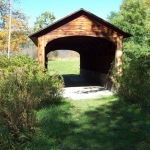 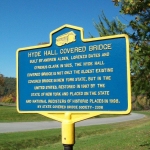 The Hyde Hall Bridge was originally constructed in 1823 and is the oldest surviving bridge in New York State. Built by Master Carpenter Cyrenus Clark, with assistance from local carpenter Andrew Alden and stone mason Lorenzo Bates, it is registered on the National Register of Historic Places as of December 17, 1998.

It is located in the Glimmerglass State Park over the Shadow Brook off County Route 31, south of State Route 20. It is 53 feet long and built with a Burr Arch truss. It is still in its original location and has always been a private bridge.

The Hyde Hall Covered Bridge is the only covered bridge still standing in Otsego County. It is owned and maintained by the state of New York and carries pedestrian traffic across Shadow Brook.

Built by Cyrenus Clark, Andrew Alden and Lorenzo Bates in 1825, this 53-foot-long, single span structure incorporates the Burr arch design patented in 1817 by Theodore Burr of Torringford, Connecticut. It is one of three authentic Burr arch truss bridges (the other two being the Perrine’s and Salisbury Center Covered Bridges) in the state and is located at the northern tip of Otsego Lake in Glimmerglass State Park. The Hyde Hall Covered Bridge is not only the oldest existing covered bridge in New York State, but the oldest in the United States. It is one of three covered bridges in New York State with horizontal siding.

The bridge was originally used as a means to cross Shadow Brook and give travelers access to the Hyde Hall Mansion. The Burr truss design was used in thousands of bridges around the country. Normally, in a Burr arch, the great arches are made more sturdy and rigid by framing them on the inside, or in-between with multiple kingpost braces and counter braces. The Hyde Hall Covered Bridge, however, incorporates an interesting deviation from the patented design, and was built with an “X” frame as opposed to the kingposts as was the Philippi Covered Bridge in West Virginia.

A thesis written by Martin J. Rykel in 1996 included original manuscripts which referred to the building of the bridge circa 1825. Presumably, Cyrenus Clark built the bridge as part of Clarke’s Otsego Lake Turnpike, a toll road designed to shorten the travel time between Cooperstown and the Second Great Western Turnpike to Hyde’s north. The three-mile stretch of toll way across Clarke’s property included his covered bridge, a gatehouse, and planked roads and fences.

On September 9, 2006, a grand celebration was held to celebrate the exciting news of the Hyde Hall Covered Bridge being the oldest existing covered bridge in the United States. The day included tours of the bridge and the Hyde Hall estate. Members from several covered bridge societies from various states were represented at the event. Featured guest speakers were State Senator James Seward, R-Milford, NY and Joseph Conwill from the National Society for the Preservation of Covered Bridges.

It is, indeed, a privilege for New York State to be home to the oldest existing covered bridge in the United States.

From East Springfield on State Route 20, go south on County Route 31 to Glimmerglass State Park. Enter the park (they usually do charge admission) and the bridge is approximately 1/4 mile on your right. There is NO PARKING at the bridge, be prepared to walk a little bit.