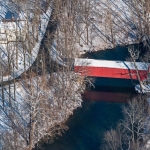 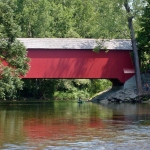 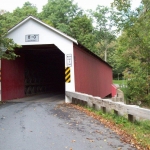 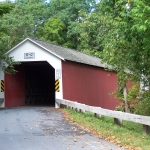 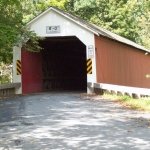 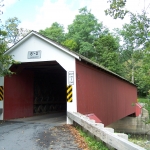 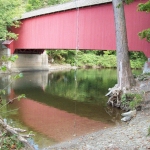 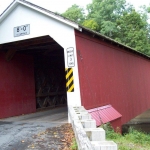 Eagleville Bridge was originally constructed in 1858 by Ephraim W. Clapp, it is listed on the National Register of Historic Places as of March 8, 1978.

The bridge is located in the Town of Jackson-Salem, west of State Route 313 at Eagleville. It is over the Battenkill, a single span of 100 feet of Town truss.

Built by Ephraim W. Clapp in 1858, this 100-foot-long,single span structure incorporates the Town lattice truss design patented on January 28, 1820, and again in 1835 by Ithiel Town of New Haven, Connecticut.

At least two unknown bridges at this crossing pre-date the present one. For the residents of Eagleville, the bridge made easy access across the river to Cambridge and Vermont. After 1852, those who wanted to catch a Delaware and Hudson Railroad passenger train, or ship their goods by freight, could travel south to the Cambridge depot or north-west to the Shushan depot.

Despite flood waters, wind and harsh winters, the bridge has staying power. In March of 1977, high water on the Batten Kill undermined the east abutment, dropping it into the river. In the nick of time, the county bridge crew diverted the river, saving the bridge. The bridge took such a twist when it went down, it was feared a great many treenails (pronounced “tunnels”) had sheared and timbers cracked. But Town’s lattice design proved to be resilient and flexible, as demonstrated by several trunnels driven out for inspection which showed no signs of distress. There pairs were made later that summer with lumber supplied by local sawyer, Roger Meyer, from clear spruce located in a paper company tract in the Adirondacks.

Over the decades, the Eagleville Covered Bridge has been re-sided, re-roofed and re-painted a number of times. In the 1940s, the Washington County paint scheme was venetian red with white portal trim. During the 2006-2007 rehabilitation, the bridge was once again returned to the venetian red color.

On hot summer days, traffic jams and noise threaten the famed tranquility of the Batten Kill as both the Eagleville and Rexleigh Covered Bridges are popular swimming holes. Kicking out a hole in the siding to jump through is a time-honored misuse of the bridge. Inspection doors and ventilation ports have been employed in the past as a nod to jumpers and to reduce the destruction. In 2006-2007, the Eagleville Covered Bridge experienced a complete rehabilitation.

At that time, it was determined that there was advanced dry rot at the place where the inspection door was, caused by rain blowing in through the open door. Thus, a wire mesh was installed over the inspection door between the trusses and the siding at both bridges.