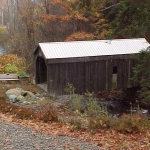 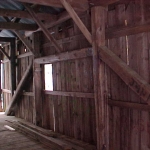 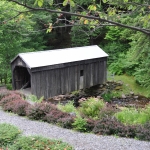 Copeland Farm Bridge was donated to the Nellie Tyrrell Edinburgh Museum & Edinburg Historical Society by a descendant of the builder, Arad Copeland. Arad built the bridge in 1879 and it is listed on the National Register of Historic Places as of August 6, 1998.

The bridge is constructed of Queen Post truss and is a single span 35 feet long over the Beecher Creek. It is located in the Town of Edinburg on County Route 4, off State Route 30. The Edinburg Historical Society has received a grant and additional funding, so are in the process of restoring the bridge.

The Copeland Covered Bridge is the only covered bridge still standing in Saratoga County and is maintained by the Edinburg Historical Society and carries pedestrian traffic across Beecher Creek.

Built by Arad Copeland in 1879, this 35-foot-long, single span structure incorporates a Queenpost truss design and is one of only two Queenpost truss covered bridges in New York State.

Arad Copeland (1805-1884) came with his family from Guilford, Vermont to the Sacandaga Valley in 1815, first settling in the Town of Day. In 1828, Arad and his brother Leonard moved to the Town of *Edinburgh, purchasing Ely Beecher’s sawmill and carriage factory located along Beecher Creek.

Arad married Anna Elizabeth Trowbridge, daughter of Edinburgh resident Willard Trowbridge. The Trowbridges’ operated a brick kiln behind their home on what is now Sinclair Road. As a wedding gift Willard donated the bricks for a house and Arad built the home for his new bride c.1832. The house still stands today across the road from the covered bridge.

Arad had 35 acres across Beecher Creek where he had garden and pasture land. An open bridge below the house gave access to this acreage until the bridge was destroyed by melting spring snow and ice. In 1879, he decided to build the covered bridge that still stands today. According to family legend, local residents Melzor Manning laid the stones,Jacob Latcher hewed the timbers and Azariah Ellithorpe Jr. framed the bridge.

Over the years the bridge received a new metal roof, new flooring and new sideboards. This bridge is New York State’s only historic Queenpost truss. A popular tourist attraction, the bridge has been photographed from all angles, painted by visiting artists and has even played host to a few wedding ceremonies.

This beautiful old bridge that Arad built to get his cows safely to pasture remained in the Copeland family until the fall of 1997 when great, great grandson Robert Tyrrell and his wife Betty graciously deeded the bridge over to the Edinburg Historical Society. This transfer of ownership will guarantee that the bridge will continue to receive the same love and care that it has received for over 120 years.

The Historical Society received several grants and waged an aggressive campaign selling “shares” on the covered bridge to raise money for its restoration. In partnership with the town, complete restoration of the bridge and 90% of site improvements were completed in 2000 and 2001. A re-dedication celebration of the bridge was held on a beautiful June day in 2002, officially opening the site to the public. The remaining site work was completed in 2003.

Edinburg is located near the large bridge across the Sacandaga at Batchellerville. In Edinburg take County Route 4 (North Shore Road) north for 1/2 mile to the bridge.