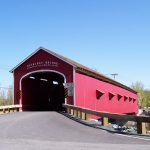 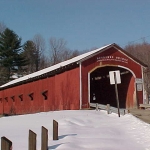 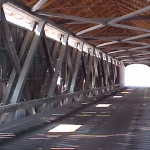 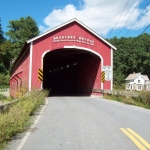 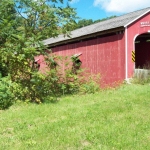 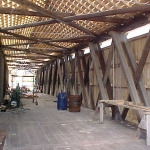 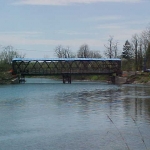 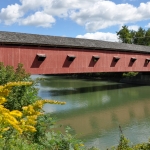 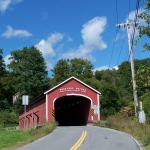 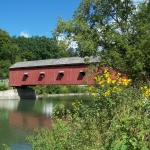 Buskirk Bridge was originally constructed in 1857 by Peter O. Osterhauth, Charles Newman and James B. Roberts (Primary firm) & Charles F. Ingalls (sub-contractor). It is listed on the National Register of Historic Places as of March 8, 1978.

The bridge is located between Rensselaer and Washington Counties in the Town of Hoosic-White Creek. This bridge is sometimes referred to as NY-42-02. On County Route 59 north of County Route 67, it is over the Hoosic River, a single span of 165 feet of Howe truss.

Built by Peter Osterhauth, Charles Newman,James Roberts and Charles Ingalls in 1857, this158-foot-long, single span structure incorporates the Howe truss design patented in 1840, and improved in 1850, by William Howe of Springfield, Massachusetts. It is one of only three Howe truss bridges in New York State.

Martin van Buskirk and his brothers were Revolutionary War veterans. Legend has it that the van Buskirk families were ferrymen prior to 1804. When Martin married one of Stephen Rensselaer’s daughters he benefited from her considerable dowry, which included 1,800 acres of land on both sides of the Hoosic River. Martin van Buskirk was one of the influential personages who saw the potential for profit in a transportation link from the Hudson River northeastward to Granville, New York.

The river crossing at Buskirk is at a point where the Hoosick River widens into broad flood plains. In 1804, this location was deemed suitable for the construction of mid-channel piers for the support of a multiple-span log bridge. It i sunknown how many times traveling across this bridge was interrupted by springtime ice breakup or heavy summer storms, which can suddenly make the river a raging, destructive torrent. A more sophisticated bridge was built in1812, possibly a single-span open timber truss similar to one built across the Hudson River in 1804 by Theodore Burr.A bridge of this design would have been set high enough to escape the ravages of ice and flood. It can be inferred that it was the lack of a roof that necessitated extensive repairs in 1849 and 1860.

The present bridge at Buskirk was originally commissioned to be built by the towns of Cambridge and Hoosick. Construction began after July 21, 1857 and was completed before
November 14, 1857 − about 3½ months.

One would think that the misfortunes of previous bridges at this crossing point would have prompted the builders to design for the worst conditions, but in 1880, a flood caused extensive damage. In the flood of 1927, which swept away many covered bridges in the area,there was two feet of water over the floor of the Buskirk Covered Bridge. In 1959, ice pushing against the bridge caused it to bow more than afoot in the middle. Ice again damaged the bridge in 1976. After a damaging flood in May that same year the bridge was raised two more feet.

Buskirk’s 20th Century history is peppered with ‘yellow flags’ and ‘red flags’ issued by New York State bridge inspectors.A yellow flag indicates the inspector’s concern about a condition that needs attention but is not an immediate safety issue. A red flag indicates a serious structural flaw that must be addressed within 24 hours. Possible remedies include(a) an appropriate repair; (b) closing the bridge; (c) lowering the posted load rating. Periodic attempts by the County
Department of Public Works and hires to remedy structural problems were sometimes actually detrimental to the bridge. The posted load rating has been as low as 1½ tons (1930) and as high as 6 tons (1960). At the time it was closedin August of 2002, it was posted for 3 tons.

Buskirk is located on State Route 67, west of Eaglebridge. Take Washington County Route 103 from State Route 67 north to the bridge in Buskirk.